Fly Parasites for natural horse fly control – they’re not just another fly on the wall. 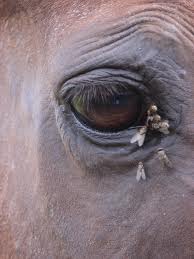 For ten years I owned and operated a horse farm.  Now I know why people who worked the land had huge families.  We only had ten acres, but between the horses, lesson program, pastures, fences and an 18 stall barn, myself, husband and two strapping boys spent the majority of our day just trying to keep up.  One of our biggest challenges was the ever growing manure pile.

Another was the ever growing pesky, barn fly population.

We tried everything from sprays and ointments, to Zip lock bags with shiny pennies, to fly strips, to collector jugs filled with sweet nectar.  The jugs were the first to go.  After about three days their stench was worse than any manure pile.  The fly strips were the next to go.  Anytime the wind blew the fly strips became traveling banners getting stuck in the horse’s manes, tails and one time, a camp kid’s hair.  Thank goodness her mother had a sense of humor.  It took 3 shampooings to get the glue and dead flies out of her ponytail.

Then we discovered fly parasites, a natural fly control system.  They are small-sized insect critters, described as “wasps” but they do not sting, they only eat fly pupae.  They are what I think of as one of the “good bugs”.

The fly parasites came shipped to us every month as eggs.  They would be in a white lunch-sack bag mixed with saw dust or shavings.  We would watch the bag closely, turning it into a home school science project.  When we saw movement we would quickly sprinkled the saw dust mixture around the manure pile and in the back of the stalls.  The hatching young wasps were eager to feed.

It is a fascinating cycle.  After the wasps fed, they could lay up to 5 eggs in the fly’s pupa, nestled in the horse pooh.  It was a good excuse to not muck the stalls that day.

Then, when the new wasps hatched, they would eat their host.   Fly parasites would then emerge from the host, instead of a pesky, biting barn fly.

Sprinkling the bags in different areas around the barn helped to broaden the fly control. Plus, it was fun.

We started the bugs in March – the horse farm was in GA – and the last batched arrived October.  After our 2nd year we hardly had any annoying barn flies but still had of lot of riders eager to help sprinkle the fly parasites around the barn.