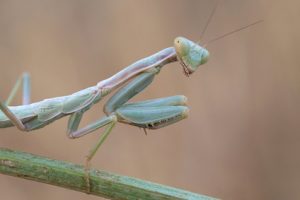 For hundreds of years the Praying Mantis has been an important part of pest control in its native China. Now because of its predatory habits and its interesting nature they have become popular world wide. Some U.S. biological control researchers dismiss the Mantis as effective pest control because they are not selective in what they attack and because they reproduce only once a year.

In defense of the Mantis, they make interesting pets patrolling the garden and excellent school projects teaching the next generation the many advantages of non-toxic pest control. If a homeowner knows that a Praying Mantis is making its home in their garden they will not be so quick to mix up a batch of toxic insecticide and spray the yard.

The Praying Mantis is the only insect that can turn its head and look over its back. It gets its name by the way it tucks its forelegs under its chin as it patiently waits for dinner to walk by. The Mantis can strike out with its arm-like forelegs and catch its prey quicker than a fly can react and flap their wings trying to escape. The Mantis has sharp hooks that hold their victim as if in a vise, always biting the neck as they start to eat.

Mantis females lay their eggs in the late fall. Looking like a small foam walnut, each egg will hatch from 50 to 200 mantises. After several weeks of warm spring weather mother nature tells the mantis babies that summer is here and it's time to come forth and control pests. At this time the young emerge from between the tiny flaps in the egg case and hang from silken threads just below the case. After drying out the tiny mantises venture out into the garden in search of food. Egg cases can be set directly outside in a tree or shrub or indoors in a bag or ventilated jar.

For a fun school project place a few Mantis babies in a large jar or covered aquarium. At first give them a few drops of sugar water and a moth or a dead fly. As they get bigger so does their appetite and the size of their prey. Be careful, if food becomes scarce mantises will attack other Beneficial Insects to survive. By summer's end Mantises can get to be 3 to 5 inches long. In late fall check your garden to see if you can find where the females have laid eggs for next summer.